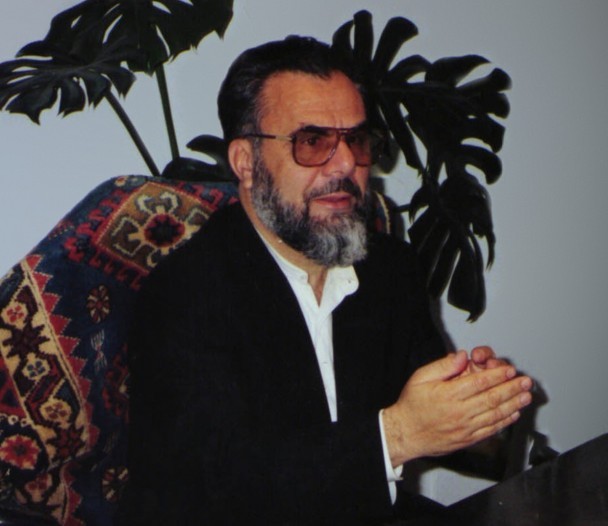 Who is Prof. Mahmud Es'ad Cosan?

He attended junior high and high school in Vefa Lisesi (an old high school in Istanbul with tradition and reputation) between the years of 1950 and 1956. Although he was a life science student in high school, he was also quite successful in social sciences and art classes like Turkish language, English language, Geography, Art, Art History, etc.

He gained the attention and appreciation of his teachers during his pre-college education with his brightness, enthusiasm for learning, study discipline and personality. He wanted to be an aircraft engineer due to his interest in technology and the popularity of engineering at that time. However, before the university entrance exam his mentor Mehmed Zahid Kotku guided him to a different major.

He got accepted to Istanbul University and majored in Arabic-Persian philology between 1956 and 1960. Beside his major, he attended courses from Medieval History and Art History departments and received certificates.

In his senior year in university, he got married with the youngest daughter of Mehmed Zahid Kotku, Muhterem Hanimefendi (Hanımefendi:a title of respect like ‘madam’).

Following his graduation, he became qualified for the assistant position in Department of Religious Turkish Texts in Ankara University, Faculty of Theology. Thereby, he entered his academic career by starting his job at university in December 1960.

He did his military service as reserve officer in Istanbul and Ağrı during the years of 1971 and 1972. He voluntarily quitted his job at Ankara University and started his educational, cultural and spiritual guidance works both in and outside of Turkey.

On February 4, 2001, he passed away in a tragic car accident while he was traveling for a mosque opening in Australia. His corpse was taken to Istanbul and laid to rest in Eyup Sultan Cemetery.

According to the perspective of M. Esad Coşan, the ultimate goal of life is not continuously trying to develop yourself. It is to gain the approval of Allah by being a good servant / a good man and by trying to lead others into the way of goodness and faith. A good man of Allah cannot be indifferent to issues of his time and society.

There needs to be social work in the ways and methods of their time and place to reach that goal. M. Esad Coşan has developed service places and methods to lead the ummah and people on this way. Waqf is to spend the fund for the sake of people and doing this for Allah.

Muslim people have earned their wealth and shaped their savings to establish waqf due to religious incentive. M. Esad Coşan is a waqf person that has devoted his knowledge, socializing, and entire self to the way of Allah. In his speeches, he occasionally said “I devoted myself to you” and always considered avenues of effective service.

There is no doubt that the establishment of waqf is one of the most valuable foundations of Islamic civilization. M. Esad Coşan states that it is the number and effectivenes of waqfs, charities, and associations that shows the value and quality of a society, and thus established many of them in his lifetime.

a. His Waqf and Association Works

The idea of establishing a waqf and being in service through this waqf had been raised by Mehmed Zahid Kotku, the mentor of M. Esad Coşan, in 1973. However, steps toward this idea had been taken on 1979 with the efforts of M. Esad Coşan. There had been many names mentioned in the meetings and it was decided to be “Hakyol Education, Cooperation and Fellowship Waqf” ( Hakyol means the true way of Allah). The formation process of waqf had finished in 1980 and activities began. The waqf was so effective on the socio-cultural life of Turkey that the group led by M. Esad Coşan had been called Hakyol Community in 80s and 90s. According to Mr. Coşan, Hakyol Waqf had three main purposes; education, fellowship, and cooperation.

Mr. Coşan published a journal called Panzehir (meaning antidote in English) that aimed to inform people on health issues, and wrote its’ editorials. Meanwhile, he wanted health workers to organize and provide efficient services. Therefore, he encouraged to establish “Sağlık Vakfı” (Health Waqf). The activities of this waqf included check-ups for people in many towns and providing clinics free of charge.

In order to teach and protect Turkish culture and its values, he encouraged establishment of the “Ilm Culture and Art Waqf”( İlim Kültür ve Sanat Vakfı;İLKSAV). He also suggested forming institutes that would act as ‘shadow ministries’ in his terms, to raise a qualified generation that would work on the country’s issues and prepare projects on the solutions. Thus, over 10 such institutes were established that are linked to İLKSAV. Some of them are History Institute, Muslim Communities and Turkish Foreigner Institute, Communication Institute, Strategic Researches Institute, Social Sciences Institute, Educational Sciences Institute, Life Sciences Institute, and Research on Islamic Sufism Institute. Through these organizations, many people served the country in social, political, economic, academic and cultural aspects.

In Mr. Coşan’s perspective, Islam is a life system that is intertwined with every second, layer and area of life. With this motivation, he also supported the opening and proliferation of “Ladies Associations” to work on female education and also “Ilm, Morality, Cultur and Environment Associations” to act on environmental issues. Moreover, he organized Family Education Programs on several occasions to educate and empower love and friendship among Muslims.

Mr. Coşan viewed the mosque as the center of life. It serves an important role, drawing and meeting the needs of people from all segments of society. Therefore, mosques need to be redesigned with regard to the needs of everyone including children, and all activities should be thought as mosque centered.

Hundreds of waqfs and associations described above are established and have been in service in Turkey and many other countries. Through these institutions, the unity, fellowship, solidarity, and qualified upbringing of people are sought.

Mr. Coşan spread love and tried to meet the needs of people with his lectures, home visits and conversations. To the places he could not go in person, he tried to reach with waqfs, associations, journals, newspapers, radio and TV channels.

He felt great empathy for the problems of Muslim communities across the World. Moreover, he had a huge map of Earth in his study room and said “ I have a map of World three times bigger than my size covering my wall and I feel sorry each time I look at it. I wish I had the map of universe there.” With this statement, he showed his dissatisfaction and his vision of aiding people all over.

Furthermore, his service scope encompassed not just Muslims. He aimed to embrace all humanity without any discrimination. He loved all people because he believed all of us are brothers and sisters since the Prophet Adam.

b. His Publication and Mass Communication Works

The radio channel AKRA and TV channel AK TV are the media organs started with the support and encouragement of Mr. Coşan. Furhermore, Seha Publication which is a home for religious, literary, historical and cultural written works was opened with his guidance.

In his leading articles for Islam, Ilm and Art, Gülçocuk, and Panzehir Journals, he used a didactic manner and adopted a light style that spoke to people of all levels. The main goal in his writings was to carry the message in the right way. Therefore, he paid particular attention to produce simple and clear texts. In his articles, except Ilm and Art, he covered the following topics: religious thought, sufi values, morality, love, history of religions, interfaith and intercultural relations, cultural values and cultural changes, Islamic civilization, Islamic geography, problems, wars and invasions in Islamic countries, educational issues, social and some current political issues, family and responsibilities, eloquence, aesthetic sense, globalization and international culture. In his articles for Ilm and Art Journal, he embraced the topics of religion and ilm, religion and literature, importance of scientific research, ilm mindset, specialization, and national culture that are in the scope of the journal. For all topics covered that matched the interest of each journal, his didactic, simple and clear style was a signature theme.

Halal gain is an indispensable matter of Islamic life and considered as a root of Sufism; therefore, Mr. Coşan paid attention to economic issues as well. According to him, the economy has individual, communal and international layers. In the world that we live in, the economy has become an arena with constant, ongoing economic wars. For this reason, he believed in the necessity of Muslim economic power; thus, he encouraged people to work hard and led some to establish businesses.